Click the logo above to return to the home page

The Priory Singers formed in 1979, and currently has around 50 enthusiastic members, many of our whom live near the coast in North Tyneside where we hold the majority of our concerts. We have a number of singers who have been with the choir since the beginning. We have a no-audition policy so that singers from various musical backgrounds can come together to perform a wide variety of both sacred and secular music. We rehearse every Monday evening, from 7.30 until 9.30pm, at The Parish Centre, Christ Church, North Shields. The Priory Singers are always keen to welcome new members, if you are interested in joining us please email the secretary.

We have three main concerts each year - before Christmas, around Easter and in the summer. The first two usually consist of longer choral works, often with orchestra. Our repertoire is wide ranging - from Palestrina to Cole Porter by way of Bach, Mozart and Mendelssohn. From time to time the choir joins forces with other groups and choirs, that take us out of home territory.

The Priory Singers is a registered charity with the aim of furthering the appreciation of choral music within the local community. A member of Making Music, our funds are self-generated by our concerts.

Note as of January 2022, programme details will not be updated on this website. Instead you can find out about forthcoming concerts on our public Facebook group. You can view details of our previous seasons below.

Our previous concerts - by season 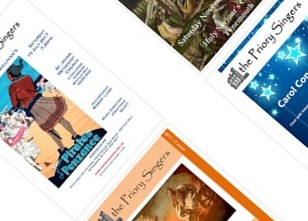 Click on the image above to view a selection of posters from our previous concerts - or browse the full list of concerts below.

Gilbert and Sullivan: The Gondoliers (July 2019)

Handel's ‘Messiah’ with the Priory Singers and Orchestra (Nov 2015)

An Evening of Beethoven and Schubert (April 2015)

An Evening of Carols, Readings and Christmas Music (Dec 2014)

The Priory Singers in Edinburgh (Aug 2014)

The Priory Singers at the Jesmond Community Festival 2014 (May 2014)

An Evening of Christmas Music (Dec 2012)

Stars and Stripes - A selection of American Music (July 2010)